Substitutes to traditional delta 9 THC and CBD are surfacing these days quickly in the cannabis science rush. HHC is one of the most novel cannabinoids to hit the market.

It has a comparable impact as THC, but there is no indication that it shows up on routine drug testing.

Because HHC is immune to oxidation, temperature, and UV light, it’s the highest stable state of THC, so you don’t have to fret about your stockpile decaying and losing its effectiveness.

Here’s all we understand about HHC, including its legal status and possible future applications.

What Exactly is HHC?

HHC-hexahydrocannabinol was first invented by an American scientist in 1944 who added H+ ions to the naturally occurring THC. This hydrogenation process is the same as the process used to convert vegetable oil to margarine.

Although Adams synthesized HHC from THC obtained from typical marijuana, the cannabinoid is now usually synthesized from hemp, a low-THC cannabis plant that Lawmakers deemed officially legal in the 2018 farm bill in USA.

HHC came to Europe in 2021, Some pioneers in the CBD industry hope that this will become a new turning point for the Hemp industry. Because HHC is technically not THC, low-THC products are legal in most EU countries.

Are all HHC same?

There are two different type of HHC molecules after manufactured: 9R HHC takes an active role in binding to the body’s natural endocannabinoid receptors, The molecular structure of 9S HHC is slightly different, and its activity is lower than that of 9R.

How is HHC made?

Because HHC is found organically in hemp, although only in small amounts. A complex method is used to cover THC with hydrogen ions in the vicinity of extreme pressures and a reagent such as nickel or palladium.

The molecular composition of THC is broken and replaced with hydrogen, but the cannabinoid’s properties and strength are basically intact. This conjugated version of THC has at minimum 10 isomers known today.

THC’s interaction capacity for the CB1 and CB2 receptors and the TRP pain receptors is increased by this apparently minor change.

Furthermore, because THC is particularly vulnerable to oxidation and breakdown in its raw state, this modification in its chemical composition makes it much more persistent.

When exposed to oxygen, HHC, on the other side, does not lose its effectiveness nearly as fast. HHC is also heat and UV light resistant, allowing it to be an excellent cannabis choice for longer shelf life.

Is it safe to make HHC?

In a well-equipped facility, HHC can be safely generated. However, as production increases, so do the dangers. Eruptions are a possible risk with HHC.

Companies will need an “explosion-proof” area to make HHC safely. HHC has an impact profile comparable to THC’s intoxicating sensation. It will make you feel euphoric, change your visual or auditory sensation, enhance your hunger, and momentarily raise your heartbeat.

Many HHC consumers classify HHC as falling between delta 8 and delta 9 THC and describe it as more calming than exciting.

In fact, the cannabinoid’s chemical structure implies it has many of THC’s medicinal and health outcomes, but little research has looked into its medical potential.

In one research, the cannabinoid beta-HHC showed amazing anti-inflammatory and analgesic properties in rodents but requires further research to assess its entire range of health benefits.

Will HHC Make you Fail a drug test? Besides HHC’s long shelf life, HHC consumers tout that it is undetectable by a typical 12-panel drug screening.

Some folks consider this appealing because other THC options, such as delta 8 or delta 10 THC, will appear on THC urination or blood testing if taken in high quantities.

For the time being, the proof for this assertion is primarily subjective, while early study indicates that HHC does not convert into 11-hydroxy-THC. This primary THC metabolite will provide a positive test.

If you ever need to pass these tests, taking HHC is your responsibility because it isn’t confirmed.

Is HHC safe to consume?

The recent spike in awareness of HHC, like other cannabinoids, hasn’t been matched by rigorous investigations into its toxicity and benefits; much of the information provided on HHC is anecdotal.

Early research suggests that HHC seems to have a safety profile comparable to THC, with documented adverse effects comparable to those associated with high THC dosages.

HHC may cause the following adverse effects:

Technically, HHC is not THC. In Europe, cannabis products with less than 0.3% THC are generally legal. Regulations vary from country to country. For example, in the Czech Republic and Switzerland, the THC in Hemp products can reach 1.0%. If HHC or any substance with same chemical structure is already listed as a controlled drug in your country，then HHC is not considered a legal Hemp extract locally.

In USA, The legal standing of HHC and other cannabinoids, including delta 8 THC, is unclear.

Many suppliers argue that it is allowed because it occurs naturally, and no regulation prohibits it. Nevertheless, because HHC does not occur in large quantities organically, different chemical steps are required to obtain useable concentrations.

Nevertheless, Drug Enforcement Administration (DEA) released a temporary regulation under the umbrella of the 2018 hemp farm bill to explain the restrictions imposed on cannabis and its elements. According to any synthetically derived tetrahydrocannabinol are Schedule I controlled substances.

As a result, the legality of HHC is primarily dictated by if it is a synthetic or natural molecule. If the Judge Rules that HHC is organic, the finished product must be produced from hemp and have less than 0.3 percent delta 9 THC to be officially legal. If it’s considered synthetic, though, it’s unlawful under federal law, as D9 is.

The reality is that HHC is something in the middle — it’s a so-called “naturally-derived” version of THC, but existing hemp rules don’t allow for much complexity.

It’s hard to say for sure if HHC is lawful or not before a legal ruling or issues a statement on the matter, so utilize it as your own responsibility.

Although HHC remains a riddle, here’s a quick rundown of everything we do understand:

· HHC is a natural chemical in hemp. However, it is rarely seen in large amounts.

· Its production from hemp necessitates the conversion of THC via a catalyst and intense pressure.

· HHC is a THC that has been hydrogenated.

· HHC possesses a more persistent chemical structure and is temperature, light, and air tolerant than THC. Therefore, the shelf life of HHC is much longer than THC.

· Owing to the chemical methods required for its separation, the legal standing of HHC is unknown. What is THCjd? Is it legal and what it does? 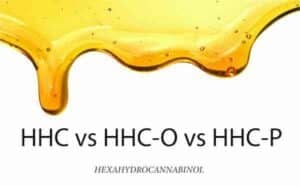